There’s something about sailing around the world that captures the imagination and inspires. For some, it’s the reason for learning to sail in the first place. Others only start to think about global circumnavigation as their skills and experience grow. Regardless of what motivates you to circumnavigate, one thing remains true. For most, it will be the challenge of a lifetime.

But how do you start the process? For someone new to sailing, the prospect of circumnavigation can be truly daunting. With so much to think about and plan for, many get overwhelmed and abandon their dreams before they begin.

This brief article aims to get you thinking about the task of circumnavigation and what it takes to practically and successfully navigate the process, from start to finish.

What Constitutes a Global Circumnavigation?

The definition of circumnavigation is a matter of debate, but there are some defined rules regarding a nautical, wind-powered trip where racing is concerned. A basic description would be to follow a route that forms a great circle. The passage must be at least 21,600 nautical miles for racing, and you must cross the equator, starting and finishing in the same port.

A cruising circumnavigation will often take a route that covers a much greater distance, with multiple diversions to visit places of interest. So long as you meet the essential criteria stated above, it can be classed as a circumnavigation.

If you are in a hurry, the current world record is held by Francois Gabart. He completed an official circumnavigation in just 42 days, 16 hours, and 40 minutes in December 2017.

No Substitute for Experience When Sailing Around the World

Some people spend a lifetime planning their trip, while others have just thrown the basics together and departed. In both cases, some have been successful, and some have not. We are trying to point out that while your planning is a necessary task, it does not guarantee success. Our best advice? Don’t keep putting off your departure because you haven’t planned everything 100%.

Start with the basic, most important tasks, and get ready to learn as you go. After all, thinking on your feet will be a big part of your circumnavigation journey.

Solo Circumnavigation, or Go With a Crew?

Single-handed circumnavigation is perfectly possible. However, it’s a huge challenge that presents certain obstacles and dangers you could avoid with a crew. We highly recommend going with a crew for your first attempt, be it friends, family, or staff. The average time for cruising circumnavigation is around 18 months, although many people travel slowly over multiple years.

If none of your family and friends are keen, you can use websites like Ocean Crew Link to find crew. You could also consider joining another boat as part of a crew to complete your first journey.

How Long Will it Take to Circumnavigate the Globe?

This really is an open-ended question. How long you have might be a better question. If you’re in a hurry, the current world record is just under 43 days. For most of us, though, we’re circumnavigating to see more of the world at a leisurely pace.

On average, most complete their journey in approximately 18 months. Riley and Elayna from Sailing La Vagabonde started their trip in 2014 and are still going strong. They have even begun raising their young son on board during the journey. Theirs is a lifestyle choice that most won’t want, though. They even took a risky approach and started sailing around the world with little to no experience. It’s a route we wouldn’t recommend, but it shows that circumnavigation is possible – even for beginners.

In the end, your circumstances and endurance will determine how long you spend on your journey.

Is Sailing Around the World Dangerous?

If anyone tries to tell you that it’s not slightly dangerous to circumnavigate the globe, don’t believe them. Sailing thousands of miles from land, passing through inclement weather, and relying on yourself and your crew presents many challenges and at least some level of risk. With proper knowledge, planning, and execution, though, you should be able to navigate your way through safely. By correctly preparing for your journey, you’ll have a better understanding of the risks, allowing you to reduce or even eliminate certain dangers.

A good starting point is learning your basic sailing skills. These skills include setting your sails and trim, boat handling, and basic navigation, to name a few. Practicing emergency procedures also helps to set yourself up to manage emergency scenarios if they arise. Man-overboard scenarios, how to make a mayday or pan-pan call, having sufficient rescue equipment, and having excellent navigation skills will all help prepare you to make the best of a bad situation. There is a wealth of information and training available both online and through professional organizations, and we strongly recommend taking several training courses until you feel adequately prepared.

Choosing a Boat for Global Circumnavigation

When you consider that people have successfully traversed the oceans in a myriad of craft – including small rowing boats – perhaps the type of boat you choose is not the most critical factor. It’s true that with help, you can cross oceans in almost anything, but the less suitable the boat, the more challenging, uncomfortable, and dangerous it will ultimately be.

The range of boats available may seem baffling, but the standard for making significant passages are the cruising bluewater style yachts. Our recent article on bluewater sailboats for under $100,000 offers insight into some well-known, competent, and affordable cruising yachts.

Vessel Considerations For Sailing Around the World

What Gear Do You Need for Sailing Around the World?

There is some sailing gear that is essential for safely navigating a circumnavigation. While this list is far from exhaustive, your boat should be equipped with the following:

Other Items to Consider for Sailing Around the World:

Your circumnavigation journey will cover more than 21,000 miles, and during that time, you will likely encounter everything mother nature can throw at you. Through good planning, though, you can choose to avoid the worst of the weather and take advantage of favorable winds and ocean currents.

Trade winds nearer the poles are much stronger than at the equator, and racers tend to take advantage of this – the passage will be colder and far less comfortable, though.

Cyclones and hurricanes occur mainly when the ocean water is warm. This happens between July and October in the northern hemisphere and between December and April in the southern hemisphere. Using this information, it’s a simple task to plan your passage, avoiding the main storm seasons. Of course, storms can still occur at any time in the year, so always be prepared for the unexpected.

In general, the ocean’s major currents follow the direction of the trade winds, but in some areas, such as South Africa, they can work against you. This makes following the trade winds even more appealing when sailing around the world.

Things To Do Before Sailing Around the World

Below, we outline some of the ways you should prepare before setting out on your first circumnavigation.

As we mentioned previously, some intrepid sailors have completed circumnavigations with no formal training and have learned while en route. While it is possible to do this, we wholeheartedly recommend you get some basic training before setting off.

The most widely accepted certificate is the International Certificate of Competence for Operator of Pleasure Craft (ICC). Once you have your national license, you can apply for the ICC, which is accepted in virtually every country worldwide. Even if a country doesn’t accept the ICC, most charter companies will, allowing you to charter a yacht nearly anywhere.

A variety of insurance policies are available for sailors, but there will likely be clauses in the policy referring to piracy and storms. If you ignore the clauses and visit restricted areas, your insurance will not cover an incident.

Piracy refers to anything from abduction and murder to petty theft and assault. Depending on where you’re at in the world, you’ll need to be vigilant to combat potential downfalls.

The Philippines and the Suez Canal are two hotspots for more severe piracy, and your insurance likely will specify these areas as high risk.

Only you can assess the risk you are willing to take. Avoiding known problem areas can be beneficial, but incidents can still occur anywhere in the world.

Get the Right Sails For Your Route

Assuming you will follow a typical cruising circumnavigation route, you’ll spend most of your time downwind. Aside from the fact that many monohull sailors find continuous downwind sailing uncomfortable, you’ll need to kit out the sail locker appropriately. Spinnakers and screechers are the order of the day, along with standard genoa sizes or furling genoa.

Many countries require visas for transit through them, and depending on where you’re going, they could take weeks or even months to traverse. You need to plan carefully, as arriving in a country’s waters without the correct paperwork could prove troublesome.

Interested in joining a like-minded social circle? Get a conversation started on the new #BoatLife forum by leaving a question or comment today!

For direct questions and comments, shoot me an email at travis@boatlife.io 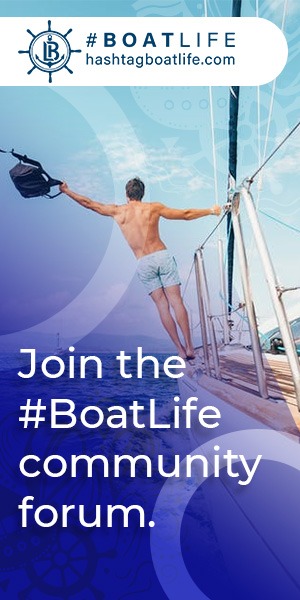 Thank you for reading

Join our online crew and find more about the #boatlife